In the late 1990s, there was a massive overhype of the internet business which led to people seeing the web as a goldmine!

The world witnessed a 996% increase in the number of websites uploaded from the year 1995 to 1996. Moreover, Investors rushed in to inject money into these upcoming companies. That means that anything ending with .com was no less than a golden ticket for millions.  As a result, the NASDAQ index reached an all-time high of 5132.52 points; the economy was blowing!

But were the profits enough to justify the soaring valuations of these dot com companies? Absolutely not! An increase in interest rates combined with the ongoing recession in Japan led to speculations. Most of the overinflated dot com companies lost half their valuations in a day! Even the e-commerce giant Amazon lost more than 90 percent of its value in two years.

Mere economic speculation triggered a crisis so huge that most of the dot com companies went bankrupt in a year!

With that being said, it is quite evident that a company cannot function in a vacuum. It is vulnerable to a lot of economic risks which are outside the influence and control of the company. In other words, fluctuations in an economy have a huge impact on the company’s performance. It affects the demand and supply sides of the market which leads to a disruption in the market equilibrium.

Hence an entrepreneur must be aware of the general economic environment. Along with this, it is quite important to understand the business cycle that your company follows and have an enterprise risk management plan to mitigate the risks in an organisation.

Now for those who might not know enough about the economic/business cycle, let’s look at this graph 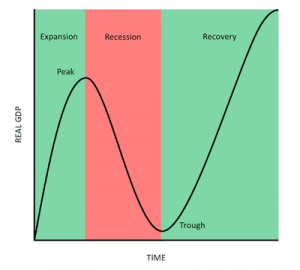 This graph depicts Walmart’s sales from the day it was opened to 31st January 2018. Walmart began to expand in 1970 in order to revolutionize the retail industry as soon as possible. Initially, the company didn’t succeed as planned but since it experienced constant growth with no recession or stagnancy, it hit the peak on 31st December 1999. Just after the peak, the company went through two recessions due to legal. The recession was thereafter followed by a trough in the year 2015 – A trough marks the end of downfall and indicates a recovery in the company’s performance. Post-2015, Walmart went through the phase of excessive economic growth up to 2018.

These peaks and downfalls make up a business cycle. It is a trend of the market which takes into consideration – the various ups and downs in the economic activity. These fluctuations are generally measured by various macroeconomic variables.  There are steps a company can take as inflation risk management to keep this cycle under control. Moreover, a company has its own natural business cycle and according to economists, if a company is experiencing a boom, it must prepare itself for a decline in profits as well!

Does this mean that a company that is doing well presently will experience a loss/descent in its profits in the future?

Not necessarily. Most economic crises declare their arrival in advance and those who paid attention to these warning signs, realign their future business plan to adapt to the changes.

Now, these economic fluctuations depend upon a number of factors. 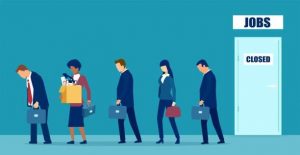 Risk involved – Unemployment risk for a company creates a cascading effect in an economy. It reduces the purchasing power of the general public, leading to reduced demand, more layoffs, and even lesser revenue for the companies. The economy tends to lose many companies during this process as they are unable to survive the multiplied fall in their revenue.

Moreover, a high unemployment rate implies lesser tax revenue for the government. In response, the government might take some fiscal and monetary measures like a fall in interest rates. Even though a fall in an interest rate should make it easy for companies to borrow loans during the recession, it is not that easy since banks become more cautious and risk-averse. Also, a lot of companies fall into a debt trap due to decreasing revenue and due loan installments.

If we go back to the year 1930, the rate of inflation was negative, that is, there was a persistent fall in the price level of goods and services. This combined with no change in the interest rates triggered The Great Depression!

Inflation and deflation do not affect all companies with the same frequency. It is harsh on some while others don’t even feel the pain.

The Rise in the Deflation rate is a warning sign that the economy might slip into an economic downturn.  Moreover, companies are the first to feel the winds of the deflation storm. Due to the drop in the price level, there is the risk of lower revenues. At the same time, they bear the burden of the real cost of wages and salaries. As a result, either the wages are cut or the employees are laid off. This further increases the pressure on the deflation curve as the demand drops further with the rise in unemployment.

In the case of Inflation, with the rise in the price level, there is a risk of instability in the economic environment.  A company is bound to increase its prices with the rise in inflation (If the company is buying raw materials or the employees would demand an increase in their wages to compensate for the hike in the price level – This increases the cost for the company)  but the rise should not come as a shock for the existing consumers.

Hence, companies find themselves stuck in a tight spot. For example, in order to fight the risk of wage inflation, the companies would be tempted to increase the prices of their goods but this will be done keeping in mind that they might lose their consumers as a consequence.

Also, inflation is not desirable for exporting firms as their goods no longer remain competitive in the foreign market. Hence, these firms face the loss of revenue from this aspect as well. No doubt inflation implies that the economy is growing but the hike in the inflation rate should be accompanied by an increase in the wage rate. The company would be able to increase its target market and help raise the standard of living for many with inflation risk management.

An economy that has a lower interest rate has more liquidity as compared to the one with a higher interest rate. More liquidity increases demand and eventually the profit margin of every company increases. At the same time, since the loans are cheaper during this time, it is quite easy for a company to expand and invest more in the research and development of their products. Hence a lower interest rate gives a boost to the small entrepreneurs and other companies which are running on a cash basis majorly.

On the other hand, a high – interest rate poses the risk of –

While it sounds all rainbows and flowers, it is way more complicated and risky as well. A business that aspires to go global- will have to bear the risk of the fluctuations in the exchange rate of different countries. 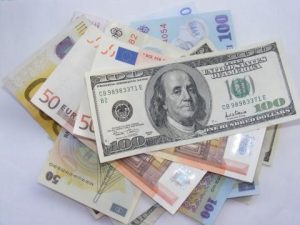 For those who might not have enough understanding of how foreign currencies’ trade, let’s look at this example – A mining company in country C is in competition with the imported coal of say Country D. If the currency of country C falls against the currency of country D, this means that C’s currency is depreciated. As a result, imported goods become expensive while exports become cheaper. In our case, the domestic mining company would boom since people won’t buy the expensive imported coal.

At the same time, if the currency appreciates, that is, it rises against the currency of Country D; the value of imported products would fall – making them cheaper. Hence, the consumers of country C will buy the cheaper imported coal instead of the domestic coal of the mining company.  This was an oversimplified example of how an exchange rate can bring a difference in the performance of a company’s success rate.

Also, during the devaluation of the domestic currency – the value of exports falls, making it more competitive in the foreign market. This is the reasoning behind China pushing its currency to its lowest point against the US dollar in 2015. Consumers from all around the world were able to buy cheaper Chinese products due to this devaluation. But a weaker Yuan poses the risk of higher imports – which will increase the inflation rate and eventually slow down every company’s performance rate.

To enhance the sustainability and resilience of companies, a risk mitigation plan could help in reducing the potential loss in the future. Enterprise Risk Management can sharpen the decision-making quality and can help companies in recognizing the upcoming downfall. This will eventually give these companies a comparative advantage over the others.

AI is vexing boards around the world who are asking whether it presents ...

Future Of Risk Technology In India

Risk Technology – the use of technology in Risk Management. Well, ten years ...

Soon, India will have its gold trading platform. If you’ve been following the ...

More in Future of risks

Why is it important to have risk management internships in more industries?

Implementing ERM for educational institutions is critical for the future education

The Importance of Being Risk Ready! Is India Risk Ready?