“Starting to run fast, only to reach an end”

5G or Fifth Generation, is the latest and fastest wireless mobile device technology being initiated in 2019. Today, 5G is expected to enhance the performance, durability, and efficiency of mobile devices with a wide range of new applications and software with build-up of e-services as well.

5G possesses greater speed but could easily take us to our end. Although it represents an unfathomable standard in the telecommunication and digital sector, the hesitancy of data privacy is a huge concern as the data exodus could be accessed with one hand and in seconds. Every revolution always brings stress and hurdles with itself. Till 4G, the network had minimal changes but the new changes with technological advancement is a mirage of easiness to people as it has many more repercussions than the previous conglomerates.

The USA is currently leading the way on 5G as it imposes great risks to an individual as well as to the government of a country and thus the security threat to the pan world out there.

Probability of exposure or loss resulting from a cyber-attack or data breach on your organization.

The graph below shows the cybersecurity growth in past years and the possible 2021 data breach that could increase up to 10% and more if 5G technology is initiated. 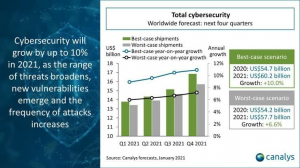 Cybersecurity vulnerabilities could give a free hand to attacks and thus could invite a disaster.

Botnet Attacks allow inter-connected devices to get controlled in order to launch a massive cyber-attack. There’s another, known as Man-in-the-Middle (MiTM) attack that disingenuously intercepts and alters communications between two parties.

5G could act as a multi-way threat by not only impacting privacy but also the health and lifestyle of an individual. Millions of studies link low-level wireless radio frequency of 5G radiation exposures to a long list of adverse biological effects.

The World Health Organisation(WHO) in 2011, classified low radiofrequency radiation as a 2B carcinogen and thus a threat to the world.

As 5G falls into the category of utilizing the middle of above and below frequency bands and its capacity utilization of high frequencies has its own implications.

Here is the review of 5G radiation could impact Health and the Environment:

Electrosmog also called electro-magnetic fields (EMF) or microwave radiation or electromagnetic radiation(EMR) refers to human-made radiation which is a pollutant.

People cannot see it or smell it and therefore, it poses a great threat. The high frequencies with short-range intensities create a more intensified denser soup of electrosmog, as shown below:

With the accessibility of connectivity between trillions of Internet of Things (IoT) devices, it is crucial that government and industry coordinate to ensure that cybersecurity is prioritized within the development of 5G technology. The White House developed the National Strategy to Secure 5G and outlined how the Nation will safeguard 5G infrastructure domestically as well as abroad.

Regardless, the kind of improvements made to encryption and authentication of data in the recent versions of the Third Generation Partnership Project (3GPP), many of the cybersecurity threats from the 4G era will persist. A good initiative could occur only when institutions and individuals join hands and work as a collaboration to prevent and mitigate these risks.

With faster connectivity, ultra-low intensity, 5G will redefine the operations of critical infrastructure activities from the plant floor to the cloud. It will enable large-scale connections and services that can pave the way for smart cities, autonomous vehicles, and other emergent technologies. But these capabilities also make 5G networks an easy target for criminals and foreign diplomats to exploit for valuable information and intelligence and even global disruption and can even raise cold war between the nations. 5G technology is a great achievement to feel grateful until risks associated with it are mitigated and people and organisations feel secure and satisfied. In the end, social benefit matters and not technological advancement.

The Importance of Risk Resilience Report

1. Functions Working In Silos: While implementing ESG, you need to be careful ...

One of the main challenges for risk managers is to develop a framework ...

What Is Credit Risk? The risk that arose due to the failure of ...