Now anyone would love to make a lot of money, but we notice from the distribution that this outcome, sadly, has a very low probability and is hence very unlikely! However, most people are more concerned with not losing their money compared to making a lot of money. Hence it is important to quantify how much money we stand to lose!

We first select and fix a significance level α or confidence level, (1-α)%. The more brave an individual is to face the risk of losing money, the lower is the α. Statisticians generally use an α=0.05 empirically.

Let us first understand the concept of Value at Risk or VaR.

Value At Risk is a measure of the potential losses that one could face. It answers the simple question, what is the minimum loss over the whole range of outcomes in the α% tail where I stand to lose? Graphically, it means the value at which the area under the curve sums up to α.

The VaR refers to a quantile. For an α = 0.05, we are interested in the 5% quantile of our returns—meaning that 95% of our returns are greater than the VaR, while 5% are to the left and hence lesser than the VaR. The smaller α is chosen, the further left on the distribution we are, and the more negative our VaR becomes.

What is the mean of the losses that I could face, over the tail that I stand to lose? Expected Shortfall Risk Measure, is a measure of the average losses over the α% losing tail.

Expected Shortfall, a concept used in the field of financial risk management takes the average of all the returns to the left of the VaR i.e. the returns which are less than the VaR. Since it is an expectation and is calculated by integrating over an entire region, it is a much more robust statistic compared to VaR which is just a single value.

Now, which one should we use for quantifying risk? Well, it depends! If you want to hate risks, use VaR. If you are a person who wants long-term returns, use ES!

Experimenting with data in R!

R is an awesome language for quantitative finance and computation risk assessment. Let us now apply what we learnt on a real data set on R! We choose the Wilshire 5000 dataset and our period of study. Don’t worry if you’ve never used R, I’ve added plenty of comments with the code so you can follow along and understand! 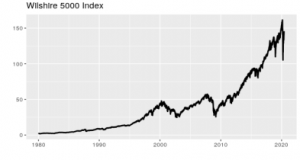 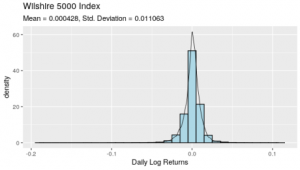 Hope this article gives you a comprehensive understanding of these two important statistics in measuring financial risk analytics!

ARE WE PREPARED FOR THE THIRD WAVE? – PART 2

1. Functions Working In Silos: While implementing ESG, you need to be careful ...

One of the main challenges for risk managers is to develop a framework ...

What Is Credit Risk? The risk that arose due to the failure of ...