Risk and crisis management has become an indispensable requirement for companies to possess today, not only due to the ease at which fake information can be spread online to the masses through social media but also due to the hardships involved in determining its authenticity. The taxing trap of controversies, rumours and gossip or worse, false accusations leading to bank-breaking lawsuits is costing the world economy $78 billion each year, with a whopping $39 billion in stock market losses. 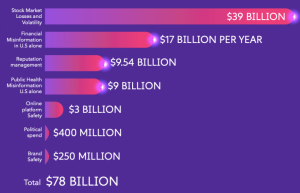 According to the internet media giant Buzzfeed, the top 20 fake stories of 2016 actually generated more engagement on Facebook than legitimate stories from major media firms1. In this day and age, fake news can spread like a virus, thanks to social media, wherein $2600 can buy a social media account with more than 300,000 followers2, propogandist organizations and unethical media firms that will do whatever it takes to make their claims seem true, by hook or by crook. In a market wherein 57% of internet users, across all geographies, age groups and socio-economic backgrounds, perceive false information or fake news as their biggest concern3, it has become inevitable for firms to learn to manage the risk of fake news- not just for the financial costs involved but also for the sake of their own integrity and reputation.

The motives and mediums.

Before assessing the damages to the company due to fake news and then proceeding onto preventative steps companies can take to do some serious damage control, the first question that arises is how does fake news spread about (up to six times faster than ‘normal’ news4!) and what are the motives behind it?

Fake news propaganda has become big business for illicit traders – for a variety of reasons. Not only is fake news spread by companies rivals to increase their sales at the cost of the rival’s business but certain media firms even get paid to advertise fake news for a company, disregarding ethical practises in order to gain publicity. Political motives top the list when it comes to spreading fake news – in the United States, the Mueller Report found that during the 2016 Presidential election, the Internet Research Agency (IRA) purchased over 3,500 advertisements, totalling $100,000, which were ‘‘falsely claimed to be controlled by U.S. activists’’5. Additionally, research in 2017 also confirmed that 60 websites publishing fake news were, in fact, earning revenue from advertising networks6! Unfortunately, however, major media firms are just a drop in the bucket when it comes to spreading fake news. The main culprit? Enter social media.

Have you ever seen a piece of news while scrolling through social media that’s oddly similar to what you’ve previously Googled? If so, you’re not alone. Algorithms implemented by platforms such as Facebook make use of “news filters” and “filter bubbles”, which fill users feed with news that is similar to their online browsing history and interests thus garnering attention and sentimental value from them. The basic human tendency of having an inclination for and attention towards anything that aligns with one’s sentiments, or is “novel”, is the reason why, according to a study conducted by three MIT scholars in 20187, false news stories are 70 percent more likely to be retweeted than true stories are. “False news is more novel, and people are more likely to share novel information,” says Aral, one of the three MIT scholars and a David Austen Professor of Management. This appetite for novelty, mixed with the strong emotions that fake news evokes in users – be it disgust, anger or sadness, is what makes fake news spread like wildfire. In fact, it takes true stories about six times as long to reach 1,500 people as it does for false stories to reach the same number of people8! 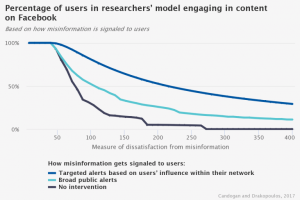 The diagram represents fake news engagement statistics on Facebook, which experienced its steepest one-day drop (-4.5%) since the 5.6% decline on Nov. 3 2017 due to fake news surrounding the US Presidential  election9.

The impact on firms.

The ease at which fake news can be spread has given rise to its threatening power, costing firms their brand image, consumer loyalty and budgets. This mass spread of misinformation online, backed by a global mass belief of an idea that’s modestly misleading but popularised by the media so many times that people actually start believing it’s true (the Illusory Truth Effect, psychologists claim), is leading to menacing damage on global stock markets, causing a potential loss of 0.05% in stock market value each year10 ($39 billion).

Firms are suffering a loss in their integrity and reputation as well – with reputational costs amounting to around $9.5 billion a year as companies struggle to cover prejudicial biases, steep legal fees and a tainted brand image. Just last year (2019) in May, Metro Bank in the UK was forced to use Twitter 11 to reassure customers of its financial health after its share price dropped by 11%. The reason? False rumours circulating on WhatsApp and Twitter, warning that the bank was close to collapse and encouraging customers to empty their accounts, once again reiterating the daredevil power of fake news.

Even multi-billion dollar companies such as Bloomberg have faced tremendous costs associated with fake news, with Bloomberg facing a five million euro12 ($7.6 million) fine for a report based on a fake news release that led to a giant plummet in the shares of French construction giant Vinci, subsequently wiping billions off its market value in 2016.

The diagram13 above shows the stock market rises and falls resulting through fake news.

The impact on firms due to fake news is one that cannot be ignored with the management of risk in this context becoming an essential requirement for firms-now more than it has ever been. Despite the increasing number of fake news appearing on social media, thanks to internet trolls, bots and “activist” pages, a study found that only 1% of the users of Facebook would actually cancel their account due to fake news14. From an enterprise risk management 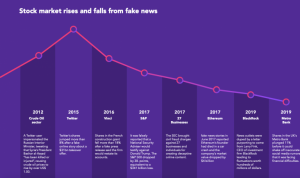 perspective, this means that the problem of tackling the spread of misinformation for active social media users, as well as the general public who can be misled by the media, is at an all-time high – firms must learn to build and maintain trust, as well as loyalty, amongst their consumers. In other words, by “building a culture of integrity, compliance and ethics that support accurate and well-verified information, with a focus on quality content and journalism”, according to Ernst and Young15.

Ironically, the widespread misuse of technology, particularly social media, is not only the problem causing fake news but it can also be the solution. Investing in a machine learning or artificial intelligence algorithm can help detect and prevent the spread of misinformation and cybersecurity breaches. Facebook and Twitter have both started to invest in such schemes, having bought Bloomsbury AI and Fabula AI respectively16, in attempt to tackle the spread of misinformation. Furthermore, Instagram will also soon introduce a “False Information” feedback option to allow users to report malicious posts. Monitoring social media accounts, both manually and through machine learning softwares, for fake news regarding the company must be carried out and once it has been detected, appropriate steps, such as investigating and addressing to the public the actual truth behind the problem, must also be taken.

No matter how reputed and well-received a company is; falling victim to fake news can still be possible, therefore making a crisis management plan (as shown by the diagram17) is a necessary requirement at all times. Companies need to act on their feet to garner their trust, loyalty and reputation back hence having a predetermined and ready-made plan for downturns has become a must-have. This needs the knowledge of effective risk managers within the firm to help analyse, assess and evaluate the fake news and subsequently move on to respond to the public and interact with the government, in extreme cases. 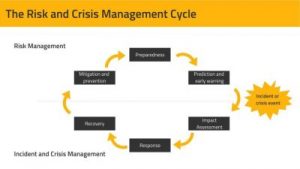 Companies now have only one choice – prepare effective risk and crisis management methods to cope with the consequences of fake news or suffer big dollars, not to mention a loss in the reputation of the company. Despite the best crisis response plans being made, the question still remains whether the public will ever really be able to differentiate between what’s true and what isn’t. Artificial intelligence, backed with a strong foundational level of integrity and trust amongst companies, is what seems to be a promising fake news prevention technique in the future. With countries such as Canada spending $7 million to increase public awareness of misinformation and Britain spending 18 million pounds on a ‘fake news fund’ for Eastern Europe only18, the problem of fake news is a huge stand-alone threat not just to firms, but also to economies/countries. Plans to build effective softwares and programs teaching the indispensable skill of enterprise risk management are developing rapidly, making the advent of a future with greater security, fewer misinformation and better enterprise risk management seem promising.

The world’s interdependence has led to an ecosystem of risks that appear to ...

Of late there has been a growing interest around ESG. ESG, as we ...