The risk management team in the Benelux region at the German life sciences multinational, Bayer, has spent the last year devising and piloting a new technique for risk assessments using a surprising product usually associated with children’s toys. The team has been using the LEGO® SERIOUS PLAY® (LSP) approach, which applies bricks specially developed by the Lego Company for the business environment. The team believes it is among the first risk managers to use the LSP method in risk assessments. The function wanted to move away from traditional ways of identifying and analysing risk where information collated during the exercise is typically only provided by a minority of the participants. David Lannoy, risk and process manager in the Benelux, says that the old style of risk assessments usually entailed 20% of the participants delivering 80% of the comments on risk. Lannoy and Helene Peters, head of risk and process management in the Benelux, say LSP now ensures that 100% of participants in its risk assessments contribute from their perspectives. 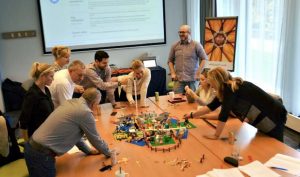 This article was originally featured in IRM’s Enterprise Risk Magazine. Get the latest print edition today (India only)

Complexity And Risk: The 4 Principles