What if I told you that Animal Welfare (especially when it comes to food) is just a marketing illusion created to ease our conscience and keep us ignorant of a multitude of factors relating to the welfare of animals, the environment, and human health? 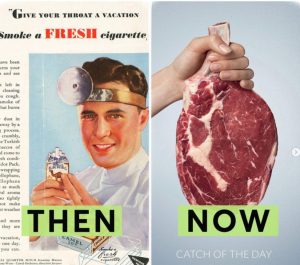 Animal Welfare when it comes to farm animals is created to promise people that the animals that they eat are looked after and have a happy life. Although, when you commodity and commercialize a sentient being, these promises simply add to the ‘cost’ of production of animal products, and like in any business, to maximize profits, unnecessary costs to the manufacturer are cut out.

This is a fact that is now widely known, but for those still wondering about the credibility of the statement, you may refer to multiple documentaries like – Land of Hope and Glory, Seaspiracy, Dominion or The Unholy Cattle of India.

Now how does this affect human health you might ask?

When animals are crammed into small spaces, are genetically modified to grow bigger, faster and are regularly fed antibiotics and other chemicals to keep them alive in such conditions until the intended time of slaughter, and are then slaughtered in front of each other, releases high amounts of adrenaline in their body, which when consumed by human causes ulcers, heart diseases and cancer.

The World Health Organization to has classified processed meats as class 1 carcinogens.

With climate change already wreaking havoc in multiple parts of the world, including the deadly heat wave in India, one might think that fossil fuels are the only ones to blame. Contrary to that belief, Animal Agriculture causes more greenhouse gas emissions than the entire transportation sector combined. Not only this, but according to the biggest and the most comprehensive study ever conducted on the relationship between agriculture and the environment (Joseph Poore), Animal products require up to 83% of total farmland on Earth yet produce only 18% of our total calories.

Cattle used in farms also produce methane as a byproduct of the digestion of their food, a greenhouse gas that is 25X more potent than carbon dioxide.

Animal Agriculture is also responsible for enormous consumption of land and water resources, and also the leading cause of soil degradation, loss of forestland, especially the amazon rainforests, eutrophication, release of toxins into water streams, collection of enormous amounts of faeces in enclosed water bodies near factory farms, species extinction and world hunger.

“How is it that we can feed and raise more than 70 billion land animals and 1 trillion farmed marine animals every single year, while millions of people die of starvation?”

The answer is simple, we use the majority of the farmlands and cut down forestlands across the world, to produce feed and space to raise animals. These animals are then eaten by higher classes in society and the poor go hungry. We could essentially eliminate world hunger if we simply produced food directly for humans instead.

Documentaries to refer to – Cowspiracy, Eating Our Way to Extinction.

Covid 19, or sars cov 2 brought a standstill to our lives, decimated and destroyed millions of lives and economies from which the world is still recovering.

How would this be relevant to animal welfare then?

As you may know, sars cov 2 started with the consumption of a bat in some Chinese restaurants in Wuhan. This can directly be liked to how to treat our fellow sentient beings. Of course, bats are known to carry many viruses, and not everyone eats bats, but the very nature of treating other sentient beings as mere food is what led to this pandemic.

You might argue about the credibility of information whether it was a natural or a human-made virus, but many examples still exist in the past.

The Spanish flu in 1918, which claimed more than 50 million lives worldwide, originated from a poultry farm in the United States. Even during covid 19, several avian flu’s were discovered in India that were then quickly controlled by killing thousands of birds. Similarly, Mad cow disease, another disease that was a death sentence for humans originated from a dairy farm in the United States. The list goes on to include the swine flu and many other diseases that originate due to how we interact and force other sentient beings to live.

So until we keep treating the animals the way we do and until we do not change our world view of ‘who’ they really are, and not ‘what’ they are, pandemics won’t be a question of if, but when?

Wider Adoption of a Plant-Based diet –

The adoption of a plant-based diet, not only will it alleviate human health but also eliminate most pandemics, as most pandemics are directly related to animals that we farm and eat.  After all, a plant never caused a pandemic.

Assisting animal rights activists and organizations to achieve basic fundamental rights for the animals by bringing in laws that protect them also alleviates these risks by a huge margin whilst creating a better world for animals and humans alike.

Ten Most Common Project Risks, How To Analyse And Solve Them As per ...