This world of rushing people has become so fast-moving, leaving no time to ponder about the World’s issues. The world is facing a lot and it is not something very recent, but it has been years now. Amongst Global warming, Climate Change, Loss of Biodiversity, Deforestation, Ozone layer Depletion, there is one more to be added to the list that is Ocean Acidification.

The world is at the edge of gigantic risk which may result in losing many of the benefits of the ocean. According to the first World Ocean Assessment, in 2015, Human beings have posed so many hazards to nature with their reckless activities like fishing, aquaculture, shipping, oil and gas exploitation, pollution, a greenhouse gas that has degraded the quality of natural reservoirs.

Oceans provide us with varied advantages which we generally overlook but when it comes upfront as a global issue, it appears as an enormous problem. Oceans are also responsible for absorbing carbon dioxide (CO2) and regulating the climate, but this potentiality of the ocean will also be curbed down and may be reversed in the coming future. The Oceans, also known as Blue Lungs, could end up being escalating global warming.

Atmospheric CO2 levels are estimated to be close to 600 ppm (parts per million), which is 50% higher than recorded in 2019 that is 410 ppm, according to the report by UNESCO. This has already crossed the upper limit put on global warming to restrict it to two degrees Celsius. Oceans are in a midway condition whether they would be beneficial for humanity as earlier or will turn against them, it all depends upon the human actions. A quite lot of developments have taken place in these years to examine the condition of the world’s ocean and its marine life, but still, significant gaps need to be filled in terms of proper implementation of policies that can help restore and sustain aquaculture.

The ocean absorbs sizable portions of warmth because of expanded concentrations of greenhouse gases withinside the atmosphere, especially from fossil gasoline consumption. The Fifth Assessment Report posted through the Intergovernmental Panel on Climate Change (IPCC) in 2013 discovered that the sea had absorbed extra than 93% of the extra warmness from greenhouse fuel line emissions. This is inflicting ocean temperatures to rise.

Data from the United States National Oceanic and Atmospheric Administration (NOAA) suggests that the common worldwide seafloor temperature – the temperature of the higher few meters of the sea – has expanded through about 0.13°C in line with decade over the last a hundred years. A 2012 paper posted withinside the magazine Geophysical Research Letters discovered that the deep ocean is likewise affected, with one 0.33 of the extra warmness absorbed seven-hundred meters underneath the ocean floor. Modeling research posted in IPCC’s 2013 Report expects that there’s probable to be a boom in worldwide ocean temperature of 1–4-degree Celsius through 2100. 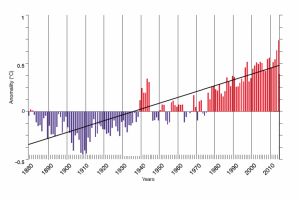 IPCC’s Fourth Assessment Report posted in 2007 envisioned that the Earth had skilled warming of 0.55°C since the 1970s. According to an evaluation through the Grantham Institute, if the identical quantity of warmth that has long passed into the pinnacle 2,000 m of the sea between 1955 and 2010 had long passed into the decrease of 10 km of the atmosphere, the Earth might have visible warming of 36°C. The ocean’s potential to take in extra warmness has shielded human beings from even greater fast adjustments in climate. Without this oceanic buffer, worldwide temperatures could have risen a lot greater than they’ve achieved to date. This is a vicious circle where Ocean warming ends in deoxygenation – a discount in the quantity of oxygen dissolved withinside the ocean – and sea-degree rise – because of the thermal enlargement of seawater and continental ice melting.

The Underlying effects of Ocean Warming

The risk assessment pointed out that the astonishing rise of sea levels, coupled with the increase in intense marine heatwaves and coastal urbanization, has become reasons for coastal erosion and flooding in coastal cities. Increasing carbon dioxide emissions have acidified the oceans, combined with warming and lack of oxygen, leading to the loss of biodiversity.

Impact on marine species and ecosystems

A Step towards Recovery

An ocean risk initiative needs to be undertaken to curb the huge environmental changes impacting our Ocean that are exposing coastal communities, cities, or even countries to much greater vulnerabilities.

There is a pressing want to attain the mitigation goals set via way of means of the Paris Agreement on weather extrude and preserve the growth withinside the worldwide common temperature to nicely beneath 2°C above pre-commercial tiers. This will assist save you the large and irreversible influences of developing temperatures on ocean ecosystems and their services.

Well-controlled covered regions can assist preserve and shield ecologically and biologically huge marine habitats. This will adjust human sports in those habitats and save you environmental degradation. Elements of ecosystems that have already skilled harm may be restored. This can encompass constructing synthetic systems including rock swimming pools that act as surrogate habitats for organisms or boosting the resilience of species to hotter temperatures thru assisted breeding techniques.

Governments can introduce regulations to hold fisheries manufacturing inside sustainable limits, for instance via way of means of placing precautionary capture limits and putting off subsidies to save you overfishing. Coastal setback zones which limit all or sure forms of improvement alongside the coastline can minimise the harm from coastal flooding and erosion. New tracking gear may be evolved to forecast and manipulate marine disorder outbreaks.

Governments can grow investments in medical studies to degree and display ocean warming and its results. This will offer extra specific statistics at the scale, nature, and influences of ocean warming, making it feasible to layout and enforce ok and suitable mitigation and model strategies.

Certain actions like- increase in the use of renewal energy and sustainable fisheries, protecting coastal ecosystems, and restricting marine emissions can limit the carbon emissions up to an extent.

The report by IPCC warns that steep cuts to greenhouse gas emissions have become inevitable without which the fisheries will falter, the frequency of hurricanes will increase and the probability of flooding of low-lying areas will also escalate. The flooding events which now occur once in a century will turn annually in coastal areas and islands. Observing the trends and climate-changing issues, it is the need of the hour to come up with integrated sustainable management of coasts and oceans, navigated by science and technology. Ocean sustainability or ocean risk management is not an initiate of a single entity or one day, but it should be a collective move from an individual to a corporate body. For the purpose of the ocean risk index, we require an understanding of the ocean, joint research, sharing of information, and technology.

Future Of Risk Technology In India

Risk Technology – the use of technology in Risk Management. Well, ten years ...

ARE WE PREPARED FOR THE THIRD WAVE? – PART 2

Now, I will address the second question, which deals with the COVID risk ...

ARE WE PREPARED FOR THE THIRD WAVE?

Human history will always remember the COVID-19 pandemic as one of the prominent ...

More in Future of risks

Why is it important to have risk management internships in more industries?

Implementing ERM for educational institutions is critical for the future education

The Importance of Being Risk Ready! Is India Risk Ready?

Impact Analysis Of A Crisis On MSMEs

A New Door Unlocked: After Becoming an IRM Alumnus